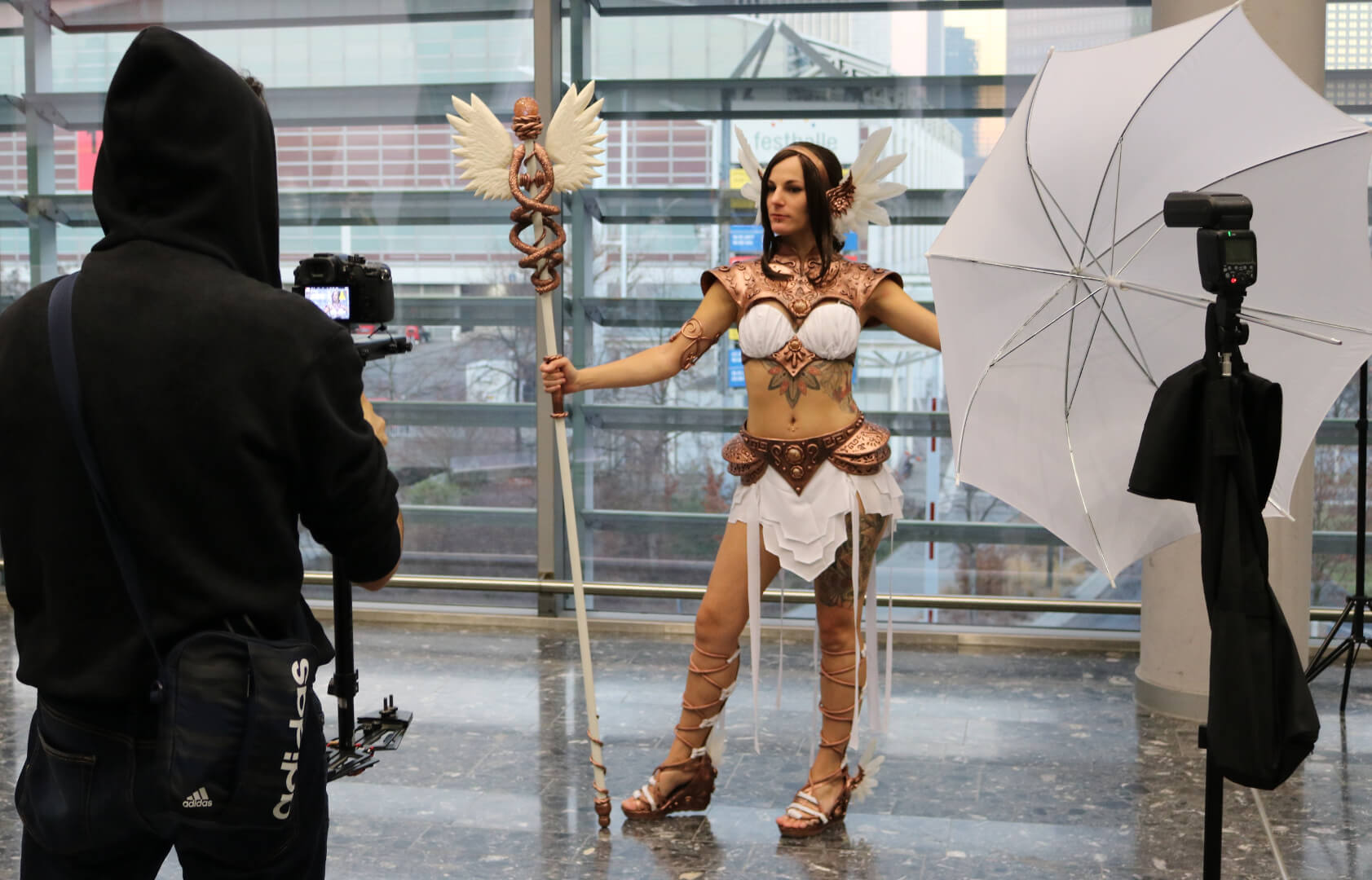 Last year at Epic con I had my first cosplay contest ever. The last stage performance was in the kindergarten or maybe primary school, it´s even so long ago, that I can´t remember.

The last weeks before the convention I watched out for some youtube videos, forum entries and blogs about the “cosplay contest topic”, but felt a bit overwhelmed and scared about it. There are so many different types of conventions, conditions and implementations with different rules and severity and the more I read or watch, the more uncertain I got. So I decided to stop doing this and also making myself crazy about the effort I´d be “meant to”.

In case of being close to my hometown Aschaffenburg, I decided to try the “SINGLE contest” on saturday with my Lovilius Hermes, because it was the only day on which it was allowed to present an original design, and followed the announcement on facebook and the website instructions to sign in. It was very easy and I think it was very fair, that the first ones who signed in, are the ones that got chosen for the competition (I read it isn´t always that way and that there´s a hard preselection on other conventions). Once I got my confirmation email, they need a few more infos, like my name + surname, a picture or collage of my character for the judges and a mp3 with music or a soundtrack for the 1min. performance. I also got a deadline to send these infos and asked for a timetable or something, because the contest would be at 14:30 pm and I didn´t know if I had to be there earlier. Elena the project manager was very friendly and answered me very quickly, that I should be there at 12 o´clock at the cosplay stage and that everybody has to bring a usb stick with the music as mp3 for backup reasons.

On my first stage performance, I thought I would faint 😀 !

The day of the contest I was a bit late because of the traffic in Frankfurt, but this was no problem. I registered at the contest booth and everybody was very friendly. I got a start number and waited with the other cosplayers beneath the cosplay stage. Here I met very nice people like Cita and Feder of cf.cosplayfactory in their very cool Yokai watch dragon costumes and had the chance to see some nice cosplayers with their costumes very closely. But shortly before my stage walk, I was so nervous that I thought I would faint, but the lovely OniCosplay (I LOVE her barbarian cosplay!) came to me and wished me good luck (thanks for that fist bump girl, it helped me to calm down a bit 🙂 ). Everybody were sooo nice at this day, really a community and I´m very thankful for that! 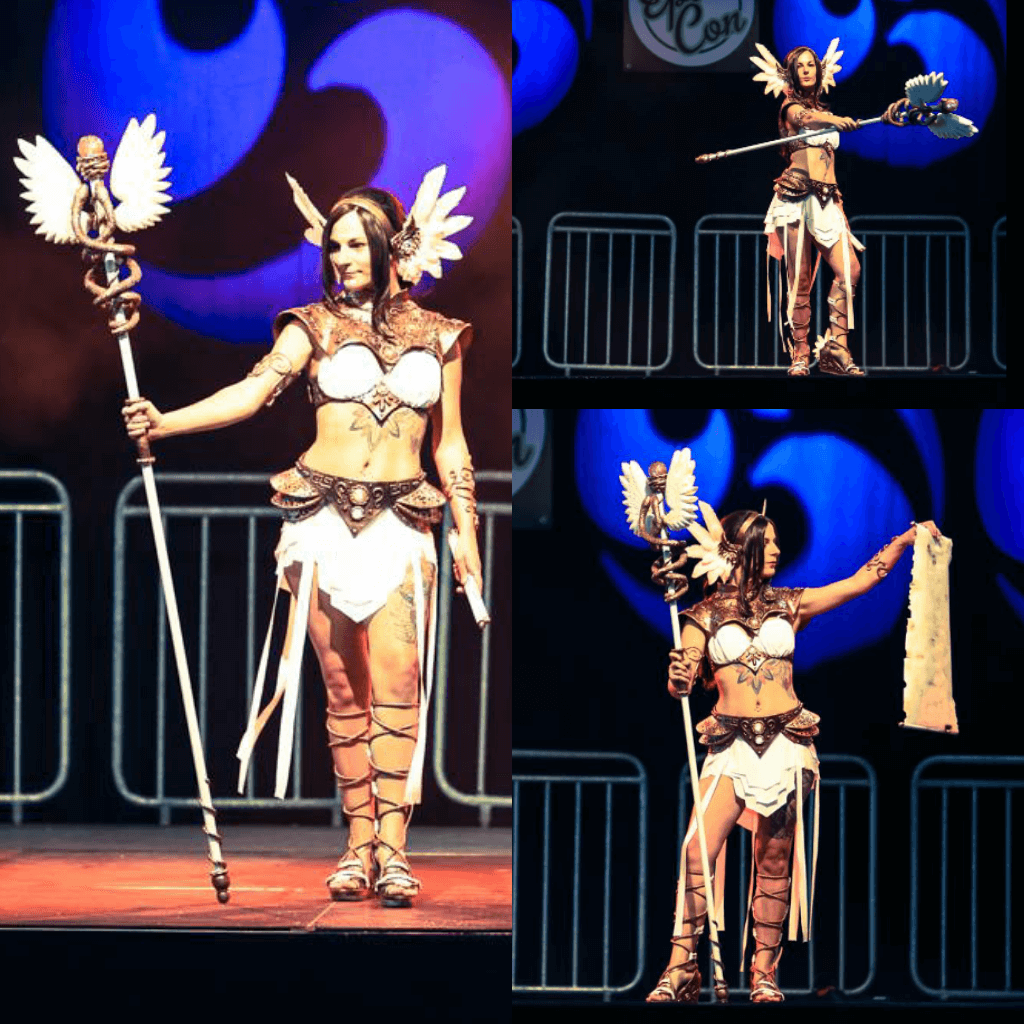 I didn´t really know what I was doing on stage (so nervous I was gaga), I surely made a few walking test at home and some with my scroll how to roll it out the best and tried some epic poses with my caduceus with my boyfriend Ben as my judge. At the end I learned (from Cita and Feder) that I made a “catwalk” 🙂 , like running up and down with cool poses and looking as badass as possible. That was fine for me, because I didn´t already knew the differences and was nervous enough without doing some crass acting like others. It was not about to gain something, than to learn some about the process of a contest. After leaving the stage, I walked to the judges and showed them my costume (the beautiful Lightning Cosplay called my costume lovely, that made my complete day <3, thank you!). After that, I jumped into the first row with Ben and watched the other performances, lots of cool & funny stuff!
Later at this day they made the price-giving and everybody get together on the stage.

All in all it was a nice experience for me, especially meeting some people I wouldn´t dare to talk to in another day. Everybody who thinks about getting into such a contest, it´s worth it! Just DO it! It´s fun to meet people and proudly show your costume! I mean, even I did it, right 😉 ?!

Although Muffin Geek Production asked me for some videography for the convention video, another “first time” for me on that day! Watch out the video below to find my Hermes cosplay in Action.